Before I’d had the chance to drink my first cup of coffee, my sister pulled in the driveway, arriving in sync with the sunrise. Kelley had wanted to make the two-hour drive from Columbus after I called her about Mom’s stroke diagnosis eight hours before, but her husband had convinced her that heavy emotions and lack of sleep would make the one-hundred mile trip an unnecessarily dangerous one. I agreed.

I threw on my bathrobe, my shoes, then practically ran out to meet her, impatiently waiting for her to park her truck. I was never so happy to see anyone in my life. I was grateful for my husband’s strength and companionship, but my sister’s hug gave me the courage I knew I would need to attend to our mother’s new state of affairs, and it affirmed that I would not have to cope with Mom’s emergency on my own.

“How’s she doing?” Kelley asked while I poured her a cup of coffee.

“Don’t know. No one’s called me for awhile, so I guess she’s okay.” I didn’t know how to prepare my sister for the woman she would encounter in the cardiac wing of St. Mary’s hospital, this confused, puffy-eyed and banged up matriarch who thought she was in a hospital in Marietta, Ohio, that it was 1991, and Jimmy Carter was the president. At least that’s where she was several hours ago; who knew where she was now?

We left for the hospital as soon as my children, Bridget and Ben, boarded their respective buses for school. I let my sister go in the hospital room first and stayed behind a few feet, watching her bend over Mom and lightly kiss her on her healthy cheek. To me, our mother looked as if she were a little better than several hours before, but I had to hold back the empathy tears I felt for Kelley all the same.

I joined my sister in the bed-side love-in. “How are you today, Mom?”

“Well, that’s a good sign. Has the doctor been in yet?”

Mom looked at me but didn’t speak.

Soon we were joined by a young, beautiful Hispanic nurse’s aide with an armful of towels, washcloths, and a clean blue hospital gown. She opened the bureau drawer and pulled out a plastic-wrapped pink wash basin, emptying the contents. I took inventory: a tiny bar of soap, a toothbrush, a miniature tube of Crest, some lotion. The basics. They would have to do for now.

Kelley and I had often talked about how lucky Mom was. She rarely visited the doctor, took nothing more than a multi-vitamin daily, had never been hospitalized except to labor and deliver three healthy babies. She lived in a comfortable apartment, and for the first time in many years, had a little extra money each month to do with what she wanted.

From my perspective, her golden years had been hers for the taking: dust them off, polish them up, take them out of the display case and use them, for God’s sake. It seemed to me Mom had stumbled through life physically intact, but now I realized that wasn’t enough, that it meant nothing at all, and it took her stroke and heart attack to deliver us all from the evil of our ignorance.

Occasionally I would glance up at the tired Jesus hanging from a crucifix on the wall that also supported a TV. I wondered if Mom knew she was a patient in a Catholic hospital, if that comforted her, but I decided not to ask. 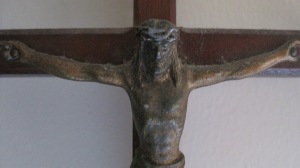 While caring for her mother in various healthcare settings, an emotionally distant adult daughter learns to love her mother for the woman she was, not the woman she always wanted her to be.